Images of my works

The shuttle motif was intended for a collar, but first it got an edging.

Then I bought this variegated wool in Berkeley and made the first collar, but for an adult collar it rounded too much.

So I made a second version with a different motif in the upper middle, so that it rounds right.

After this thought it would get also a nice doily and made the first version. but the I thougt it could lighted a bit up and made bigger on top of the squares. First i put daisy flowers on top, but then I thought this would have too much limited the persons able to follow the TIAS. 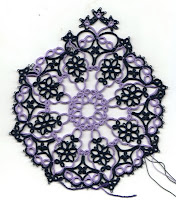 For the beginner class in Berkeley I made this bookmark which is "the key to tatting".

Then I made also e second bookmark with advanced techniques, but I lost it, so I show you here the design:

I designed also this other edging with advanced techniques, but we did not do this. Though some of them also learned how to make a cluny leaf.

It's all very inspiring, thanks for showing us. Our TIAS doiley will be beautiful.

Everything looks so pretty! I'm ready to start another doily. Will use other colors. Thanks so much for everything!

the collar is pretty but looks complicated. you must have spent quite a bit of time figuring out the pattern. nice work!

My webpages and other blogs 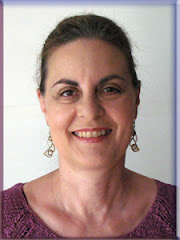 Iris Niebach
Tatting is my principal hobby. I like to create tatted items and I have since now published 7 little books. I have been invited to teach tatting in Japan, in Denmark twice, at Palmetto's in South Carolina, at Lacis in Berkeley California. I also love to study and to speak foreign languages, and I love to teach my mother language, which is german

This is a Flickr badge showing public photos from iniebach. Make your own badge here.

Not Tatting, but interesting